Here’s a simple but pretty wall hanging for an invitation. This one was for a wedding. It’s made with textured glass called Everglade. The swirls in the glass make it special. I used decorative brass corners plated in antiqued silver, which I added just a hint of gold powder onto. The frame uses a traditional picture framing “sawtooth” hanger. This way you don’t have an unsightly line showing through the clear glass! 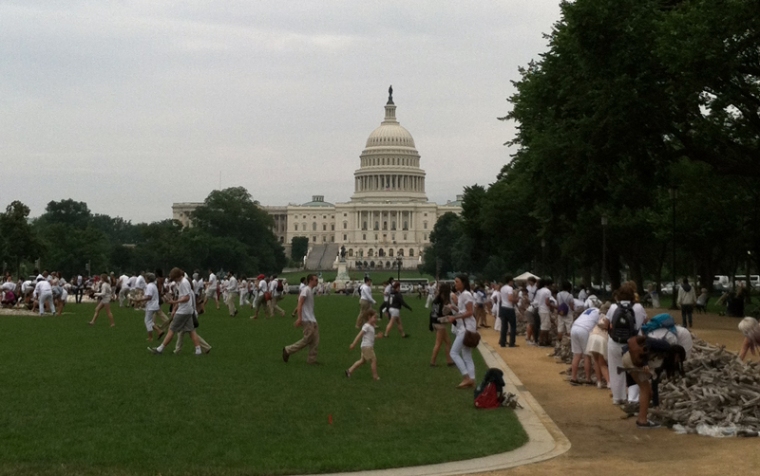 Recently I went with my husband to Washington D.C. to visit friends. We were on our way to the National Gallery of Art, primarily to see the Albrecht Dürer exhibit. We passed by the Mall and saw hundreds of people dressed in white running to piles of what looked to be bones, grabbing a handful and placing them on the lawn. Interested, we took a closer look. They were, of course, fake bones, made of recycled cardboard: egg carton-like material cast into a variety of bone shapes. From their website is a brief synopsis:

One Million Bones is a large-scale social arts practice, combining education, hands-on art making, and public installations to raise awareness of ongoing genocides and mass atrocities in places like Sudan, South Sudan, the Democratic Republic of the Congo, Somalia and Burma. For the past three years we have been collecting 1,000,000 handcrafted bones for a three-day installation event on the National Mall in Washington, D.C., June 8-10, 2013. The installation will exist as a collaborative site of conscience to honor victims and survivors, and will also serve as a visual petition against ongoing conflicts and a resounding call for much need and long overdue action.

We watched and read about the project and moved on. We saw the amazing Dürer exhibit and then went over to the west building to see the Edvard Munch show and then browsed around. One of the rooms had just 4 large paintings by Thomas Cole, The Voyage of  Life. I found the scenery depicted was fabulous (though the angels were too much) and I loved how he handled the clouds. Steve was particularly struck by the series and asked me for my phone to photograph them. As we walked back toward where we parked we were just about at the bones again and I wondered how far they had gotten while we were inside. Steve was talking about the Cole series and saying how sometimes he doesn’t like the art for the imagery but more for the meaning. I was thrilled! This is what artists throughout time, all over the world have been trying to get across! Artists have used many forms of media to produce something that inspires and moves you emotionally. This clearly was what the One Million Bones project was all about. The chance to bring a message to the general public in a format that transmits the message in a powerful way.